Alexander’s Festival Hall is the brainchild, accident, ward-of-court, or otherwise hazardous literary-musical adventure of Alexander Mayor. A musical project that began as a date with an antiquarian book-selling model that went spectacularly wrong in the bar of yes, the Royal Festival Hall. Moving right along… 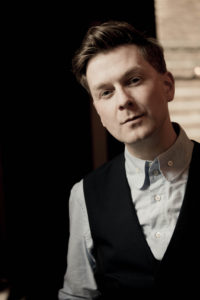 New album and book: ‘Not From Above!’ (Unbound Books, coming 29 April 2019)
Not From Above! is my first fiction collection. It’s a series of what ifs, how-abouts and darkly comic thought experiments. You’ll meet dictators with misplaced literary ambitions. Young spies pursued on bicycles. Passive aggressive board games. And fitful efforts at damage limitation in the surviving parts of Switzerland.

These are tales of decisive moments for indecisive people. Where dating has become more dangerous and ‘promenade theatre’ a little too immersive. Adventures are undertaken somewhat unwittingly, in stories that catalogue the increasingly esoteric ways Londoners try to keep themselves amused…

And the record?
‘Not From Above!’ is also an album of twelve upbeat, lush and romantic pop songs. Literate, hummable tunes that capture painters on the brink, women on the verge, and men lost somewhere on a hillside. Trumpets make a timely appearance. Double bass, likewise. Oh and there’s that moment when a breakdown on a country road might just be the start of something promising. Buy a book and gain an album.

Oh and about that first album
On his first album, “Not a dry eye in London” (2013), Alexander pulled in a diverse cast of musicians from the drummer of metallers Pig Iron to Brooklyn performance artist Clark ov Saturn, Australian folk singer Clare Younis, LA’s The Birthday Girl on 70s disco recollections, Piney Gir on a lonesome duet about the possibility of weddings, and many more. AFH doesn’t like getting pinned down to one sound and so the record which begins in the green room, dives into underground clubs, jumps back to the disco-era, noses up through German-tinged electronica and concludes bleary-eyed in a field. You can’t ask for more than that in 46 minutes.

Even more previously
He’s the producer who produced Piney Gir’s 2009 “The Yearling” taking a Kansas gal on a trip into Euro electronica and wonky jazz. He was one third of Baxendale when they delivered “I built this city” onto European dancefloors via those nice people at Kompakt.